The Power of One Young Man 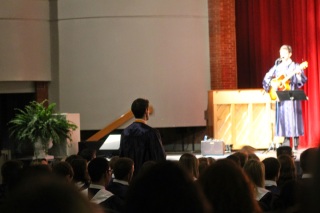 Last evening I attended my youngest son’s Baccalaureate service at his high school. It was your normal fare of scripture reading, a special message, and prayer, but it is what happened during one special song that made the event a special one.

A talented senior brought out a guitar, called his classmates to worship the Lord with him, then sung the song “Oceans” by Hillsong. This lyrics of this song are a perfect call to graduates to cling to the Lord even when feet may fail (on the ocean). It was moving, to say the least.

Yet what happened in the middle of the song gave me goose-bumps and brought tears to my eyes. A brave young man rose to his feet. He didn’t raise his hands or dance in his seat. He stood. He stood with his hands clasped in front of him. He stood in honor…in honor of the One and Only.

It couldn’t have been easy for him. There were many graduates in the crowd who were Christians, yet he was the lone soul who stood to honor his Lord. No one else rose to stand with him. He stood alone. It takes courage to stand alone. It takes a heart surrendered to give of oneself in the face of solitude.

We should all strive for such a heart.

One response to “The Power of One Young Man”