I attended the funeral of my Mamaw today. She would have been 100 years old next month. We had a small visitation before a small graveside service in McKinney and it was a beautiful tribute to a life of faith lived well.

My cousin, Curtis, said the eulogy, my husband John said the prayer, and my brother-in-law, Steven, sang the Lord’s prayer and led a couple of hymns. My father did the main talk and spoke about my Mamaw’s life. There were things said that I hadn’t heard before and I so I thought I’d get the notes from my Dad and share them here. 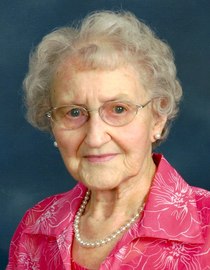 Maggie was born in Whitehouse, Tennessee and lived through times that bred strong, durable, hardy people. They had no automobile and walked to church and school.  Her father was a tobacco sharecropper and she had to drop out of school at the end of her 9th grade year to help on the farm. She developed a strong work ethic and faith that characterized the rest of her life.

She was a teenager when the Great Depression hit in 1929. Money was scarce, but they survived living off the produce they grew on the farm. Later she began to date, but would dismiss any suitor that did not profess faith in Christ. Entertainment was scarce, but there were plenty of church functions, picnics, and socials to keep them busy.

In 1933, there was a 3-day debate between a Baptist preacher and Church of Christ preacher. People came from all over by way of buggies, wagons, horseback, cars, and by foot. Maggie was sitting in a pew, listening to the debate when a sweet potato rolled along the floor and hit her foot. She just kicked it back behind her to get it out of the way. The sweet potato rolled a couple of pews back to hit the foot of a young man named WT Smith, who had traveled from Kentucky to hear the debate. Looking up to see where the potato had come from, he spied the lovely Maggie. He decided pretty quick that he needed to move to Tennessee and court Maggie.

Maggie had expected to be a the wife of a farmer, but WT was determined to be a minister of the gospel, and so she accepted that role and became an exceptional helper to him in his ministry. She was an excellent cook and hostess, which proved invaluable as WT was known for bringing home guests without any notice.

They served at 7 churches in Texas, beginning at San Antonio and ending up at McKinney. Since ministers didn’t make a bunch of money, Maggie supplemented their income by sewing for the public. At one point she drove from McKinney to Sears in south Fort Worth to bring in money.

She was a faithful wife and as WT’s health declined in their later years, she nursed him until she was no longer capable of taking care of him on her own.

Maggie has serious blows to her own health, with osteoporosis and arthritis making it difficult to make it through the day pain free. And then at 90, a stroke left her right arm and leg weakened. But determined not to give in, Maggie kept doing all that she could to be independent. She even went to renew her license and they told her she still had a couple of years left on her license. (though after her confession of her stroke, they wrote her a letter asking her to come in for a test) That put an end to her driving.

Her abilities declined and she got to where she could barely stand without a walker. She would continue to make her bed and attempt to do her own laundry. She was determined to stay active and began crocheting dishrags. She made hundreds of them, giving them as gifts to those around her. It was a small thing, but she did what she could do for others.

She was a woman who didn’t expect life on a silver platter. She dealt with whatever life shoved at her and faced them head-on. She did what had to be done.

Her mind was good until the end, though her body weakened until she could do nothing. She hated the forced inactivity, but endured it as she had throughout life.

She had a simple, strong, immovable faith all her life. She knew what she believed and never wavered. Toward the end, she often said she was ready to go and be with the Lord and she achieved that goal on December 28, 2015.

At the end of her life, Maggie Smith could say as Paul did in 2 Timothy 4:7-8: “I have fought the good fight, I have finished the race, I have kept the faith. Finally, there is laid up for me the crown of righteousness, which the Lord, the righteous Judge, will give to me on that Day, and not to me only but also to all who have loved His appearing.”

As the last chapter of Maggie’s life closes, we celebrate a life well-lived. She was the kind of person strong families, churches, and nations are built upon. Her life is worth emulating as a shining example of strength, perseverance, endurance in the face of difficulty, and a strong belief in the Lord.

Hers was a life that inspires us to persevere…to stay strong…to not waver. We should be inspired to accept with grace the tasks God gives and the limitations life imposes. We should be encouraged to pursue the same goal as she, following her shining example with assurance that we too can experience “death swallowed up in victory” as she now does. 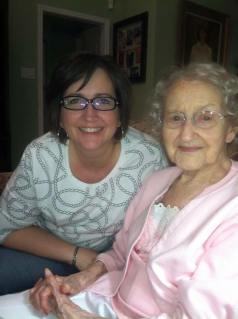 I love living with the assurance of knowing that I am the Lord’s and He is mine.

Thank you, Mamaw, for being God’s child and sharing His love to all. You made a huge difference in this world.