Many of you saw on Facebook, Twitter, and Instagram the pictures of me signing my new contract with Lighthouse Publishing of the Carolinas for my medieval romance. I look excited, don’t I?

I thought I’d share the story of how “the call” came to be and the funny story of where I was when I received that call.

It all began when I was reminded about #FaithPitch on Twitter. (Note: There are several Pitch Days on Twitter where you pitch your story in 180 characters or less. If an editor or agent wants you to send them a query/proposal, they LIKE your pitch.) The day was February 28 and I had totally forgotten about it until a friend asked a group of us writers if we were doing it. It was early afternoon and so I pitched my medieval romance, The Lady’s Masquerade.

I checked Twitter off and on the rest of the day, but had no “likes” so I chalked it up to another good experience and moved on. Let me be honest here and say that out of all the social media I am on, Twitter is the one that I don’t check as often. So FOUR DAYS LATER, I check Twitter and lo-and-behold, I have a private message from Pegg Thomas (she is also an author) from Smitten, the historical line of the Lighthouse Publishing of the Carolinas! She said to send her a proposal and she would take a look at it.

Yikes! It had been FOUR days since she had reached out to me!

You writers out there are probably rolling your eyes, but I’ve never been asked for a proposal. A query I could do, but a proposal? So I got online and researched. I had a friend send me a sample one, which helped tremendously. I got busy on it and gave it to my critique group to look over. Bless their hearts, they got it back to me that same day.

I submitted the proposal and was asked for the full manuscript! Be still my heart!

And then I had to wait. Here’s the thing – in the writing world, nothing happens fast. Sometimes you submit your work to an agent or editor and it takes days, weeks, and even months to receive reply. I was prepared for a good long wait, so I got back to working on my second book, delving into the medieval world once more. 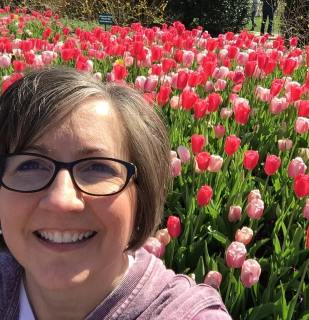 Tuesday, March 13, I went to the Dallas Arboretum with my friend and her two boys (I call them my “adopted” grand-kids.) It was a glorious day and we got to the section specifically for children. The older boy wanted to get in the Tornado Tunnel, a telephone booth sized tube that creates a mighty wind inside. I got inside with him, then my phone began to ring. I pulled out my phone and checked the number.

Could it be a contest win? I was a finalist in a contest, so I decided I needed to answer the call. I said “Hello” and a woman answered, but I couldn’t hear her name because the wind had started to blow. And boy, did it blow! I am a little sketchy on what was said here, because I was trying to get out of the tube so I could hear and explain to my friend I really needed to take this call.

Once I was out of the crazy wind, I realized it was Pegg Thomas again and my heart began to pound. You know that weird sensation when things are surreal and even though there is a lot of noise and commotion, you can’t hear it? Yeah…that was me. And throughout all the weird feelings and tunnel vision, I heard those fabulous words:

“We would like to offer you a contract for your book.”

Yep! A contract to publish my medieval romance! I really didn’t expect to get a medieval published, as it’s not really the “happening” genre right now. I truly expected to seek out a different time period to write. But I am so glad God had other plans for this story.

My dream of writing and publishing a book, which started in high school, is being realized. A dream put on hold as life, children, and jobs took precedence. A dream finally come true. Thank you, LPC, for taking a chance on me!

Lighthouse Publishing of the Carolinas is a small press publisher making waves in the Christian arena. With many lines, they are putting out award-winning books and creating buzz for excellence. Check out their books HERE. Also, if you love historical romance, join LPC’s Smitten Facebook Group to learn more about their books and their authors.