My Attempt At An Art Journal

I finally tried it. I have put it off for so long, spending time looking at art journal pages on Pinterest, wishing I could do something like the ones I have been pinning. But after my post yesterday at The Writer’s Alley on fearing failure, I decided to bite the bullet and at least try to do a page or two.

First I took a book with a hard cover and tore out every other page. I must say this was difficult for me, a book lover and reader extraordinaire. But creating something beautiful out of something I already love seemed like an okay thing to me. So I took a ruler, put it along the binding and tore the page against it. I DID keep the pages I tore out. I figured I could use them in the journal later….tearing them or cutting them into shapes.

Then I painted some gesso on two pages. This primes the page to accept paint better. I’ve seen YouTube videos where you don’t have to do this step, but I did to ensure the paint would work. (I’m sure I’ll experiment without the gesso later!)

Then I put a dab of blue and a dab of green on each page and spread the paint around the page with a really wet paint brush. Then I let it dry.

Then I sprayed some red Dylusions Spray Ink on each page and let it dry. Then I stamped a cross all over in black ink and used a stencil for the fleur de lis.  After it dried, I found some cool magazine images and pasted them on with mod podge. The cool thing about the mod podge was when it touched the red ink, it would smear the red. I played that up, spreading it further out. It was a nice surprise.

After the glue dried, I took a black pen and journaled a bit. Then I got a white paint pen and had some fun with swirls and outlining. 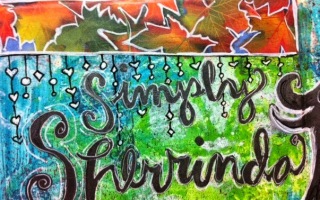 It’s kinda messy, but I am happy with how it turned out. For a first time, it was a success in my eyes. And I had so much fun!

8 responses to “My Attempt At An Art Journal”